Cinnamon is my favorite spice, and I love using it in baked goods. One of my favorite desserts is cinnamon rolls. However, they can be time-consuming to make. Therefore, I was inspired to create these cinnamon sugar cupcakes.

The cinnamon sugar cupcake consists of three main parts. The first being the cupcake, of course. The second is the filling, and the third is the cream cheese frosting.

To make the cupcake, the following ingredients are needed:

The batter of the cinnamon sugar cupcake is easy to make. First, we need to combine all the dry ingredients together.

Then in a standalone mixer or a handheld mixer, beat the butter until creamy.

Then add in the sugar and beat until light and fluffy.

Then add in the eggs one at a time, followed by the vanilla extract.

In a small bowl, mix the white sugar, brown sugar, and cinnamon powder together.

In the bowl of your standalone mixer or handheld mixer, beat the cream cheese, butter, sugar, salt, and vanilla extract together until all the ingredients are combined.

I highly recommend pouring your cinnamon sugar cupcake batter in a piping bag fitted with a round nozzle to make these cupcakes.

Then in a cupcake pan aligned with cupcake liners, make a swirl as seen below using your cupcake batter.

Then sprinkle ¼ teaspoon of the cinnamon sugar filling on top of the swirl.

Next, apply a second swirl layer of cupcake batter.

Pour ¼ teaspoon of the cinnamon sugar filling on top of the second layer.

Now your cinnamon sugar cupcakes are ready to go into the oven. Bake the cupcakes for 11-12 minutes or until a toothpick inserted at the center of the cupcakes comes out clean.

Allow the cupcakes to cool to room temperature on a cooling rack before decorating them with frosting. 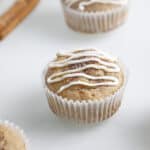