A coconut base cupcake filled with a chocolaty center and topped with cream cheese frosting is a combination made in heaven.

I have made this recipe multiple times for my family and friends, and everyone loved it. The best part is no one knew it was gluten-free until I told them. I was deeply satisfied to know I could bake something that tastes so delicious that my gluten-eating friends (whom I envy sometimes…) wanted to eat. Anyways enough of me babbling; let’s jump into the science of each layer in these cupcakes.

To give these cupcakes a rise and a nice texture, we will be using baking soda, baking powder, and xanthan gum. The baking soda and baking powder will work to leaven the cupcakes. You will notice that the amount of baking soda used is small compared to the baking powder. This is because most of the ingredients used in the recipe are not acidic, and hence the baking soda (an alkaline compound) does not have an acid to react with.

You will first start the process of making these coconut cupcakes by mixing the dry ingredients together and setting them aside. Then combine the canned coconut milk with the vanilla extract in a separate bowl.

Cover the ganache well and set it aside until it reaches room temperature before piping it. If you don’t cover the ganache, it will form a crusty layer on top which is really annoying to remove.

The ratio of chocolate to heavy cream that I used for this recipe is almost 2 to 1. I like the ganache consistency to be thick so that once it is inside the coconut cupcake, the cupcake doesn’t absorb the ganache. If you prefer a lighter consistency, try changing the ratio to 1.5 to 1.

You will start by beating the butter, cream cheese, and salt together using a stand-alone mixer with a paddle attachment until the butter is fluffy. Then add the sifted powder sugar and beat at low speed, increasing the speed to medium-high speed. Beat the ingredients until everything is combined, then add the vanilla extract for flavor and mix.

Don’t overbeat the frosting. If you overbeat it, you will incorporate more air into the mixture, leading to a running consistency.

I made a short video to help you make these cupcakes. Enjoy! 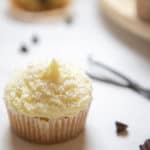