Fluffy and moist gluten-free cinnamon rolls recipe. This cinnamon roll recipe was requested by Sarah, and she specifically asked for fluffy cinnamon rolls. So here it is! If you want a specific recipe, feel free to request one here.

Everyone loves cinnamon rolls; I'm yet to meet someone that doesn't. I used to make cinnamon rolls pretty much every month before I found out I was gluten-intolerant. Before we dive in, want to know a little fact? Cinnamon rolls date back to the 18th century!

I did not want to give up on fluffy and soft cinnamon rolls when developing this gluten-free cinnamon roll recipe. Hence, please avoid substituting any of the ingredients as every ingredient used in the recipe was well-studied.

We will begin by checking if the yeast is active by heating the milk and water to 49-55°C (120-131°F). Then add the sugar and yeast and gently stir. Cover the mixture and let it sit for 10 minutes at room temperature. If bubbles form, it means that the yeast is activated and ready to go.

Next, mix the dry ingredients such as flour, xanthan gum, salt, and baking soda in a separate bowl. Then add the egg, apple cider vinegar, sour cream, and yeast mixture and combine using a stand-alone mixer with the paddle attachment attached or a hand-held mixer at low-medium speed. You can even try to form the dough with your hand, but it will require a lot of manpower.

Afterward, add the butter one tablespoon at a time and combine. Then, divide the dough into two separate equal parts.

Then working with one dough at a time, brush a tablespoon of butter onto the dough, and add the cinnamon-sugar filling.

Cover the cinnamon rolls tightly with plastic wrap and a damp towel, and let the rolls rise for about 60-90 minutes.

Then add the cream cheese frosting to the top of the gluten-free cinnamon rolls and serve while it is warm.

Store gluten-free cinnamon rolls in an air-tight container in the fridge. The rolls stay soft for up to three days in the refrigerator. To reheat the rolls, heat the oven to 160°C (320°F) and heat the cinnamon rolls for about 5-7 minutes. 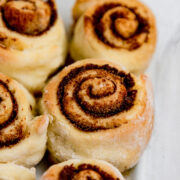