These gluten free german chocolate cupcakes are decadent and soft. The moist chocolate cupcake base, against the creamy chocolate ganache and the crunchy coconut-pecan frosting, is irresistible and will make your guests ask for more!

Cupcakes are great for parties, game nights, and general get-togethers. I find them convenient, as guests can effortlessly grab a piece.

You would think that this german chocolate cupcake originated from Germany, but it didn't! It originated from the U.S and was given the name "German" because the recipe requires dark baking chocolate, which was formulated by an English-American chocolate maker named Samuel German. The person who invented this recipe was Mrs.George Clay in 1957.

So I guess we all owe her a BIG Thank you for this decadent chocolate cake!

Originally, this should be a layered cake, but we are making it into a cupcake.

The chocolate cupcake base is the same one I used in my chocolate peppermint cupcake recipe for Christmas. So if you have time, check it out!

These few ingredients mentioned below are vital to achieving soft german chocolate cupcakes:

The trickiest part of this recipe is making the chocolate cupcake and the coconut-pecan frosting, so I will focus on those. The chocolate ganache is easy to make but if you have issues, leave me a comment below, and I will get back to you as soon as possible!

Can I convert this gluten free german chocolate cupcakes recipe into a two-layer cake?

Yes, you can, but you will have to double the recipe. The doubled recipe will fit two 9-inch round cake pans. Bake the cake for 20-25 minutes, or until a toothpick inserted at the center comes out clean of crumbs.

Why is my coconut-pecan frosting not thick enough to add to the cupcakes?

The coconut-pecan frosting will thicken as it cools down. Let it chill in the fridge for up to one hour to speed up the cooling process. If it is still not thick enough after the chilling period, add more shredded coconut until you achieve the desired consistency.

My chocolate cupcake batter is too thick; what happened?

If the cupcake batter is too thick, it means that you overmixed the batter. Add water or milk until you achieve a pourable consistency that is not too runny.

How do I toast the pecans?

Place the pecans on a baking tray aligned with parchment paper, and toast them in the oven at 180°C for 7-10 minutes. Toss the pecans halfway through the baking time to prevent them from burning. 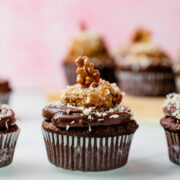