Butterscotch cinnamon pie with walnut and apples is a pie you won’t forget.

The first pie I ever made was a butterscotch cinnamon pie. I made it for game night, and everyone loved it. It is a butterscotch pie and an apple pie combined together to create a great pie. To make this pie, I used a gluten-free pie crust mix. If you are not gluten-free, feel free to use any other premade pie crust of your choice.

The beauty of this pie is in the filling. To make this butterscotch cinnamon pie, you will need the following:

Golden Syrup: Golden syrup is used as a sweetener in this recipe. It also provides the butterscotch cinnamon pie with a subtle caramel flavor that is irresistible. You can substitute golden syrup with corn syrup; however, you might be sacrificing flavor by doing that.

Unsalted Butter: The butter does not need to be at room temperature. I recommend using unsalted butter as this is a sweet recipe, and having salt in the filling can ruin the pie.

Eggs: The eggs will be used to thicken the filling and provide it with structure.

Vanilla Extract: The vanilla extract is optional and can be omitted if you don’t have it in your pantry.

Apple: I recommend the use of green apples in the filling. It is not too sweet and is sturdier than red apples. Once baked, the green apples don’t turn mushy. The apple needs to be diced into large cubes.

Walnut: The inspiration behind adding walnuts to this recipe comes from the recipe book Butter Celebrates by Rosie Daykin. The addition of walnut with butterscotch is genius and delicious. The walnuts add a nice crunch to the pie. If you are like me and don’t like cream pies, this recipe is for you.

Ground Cinnamon: The addition of cinnamon compliments both the apples and the butterscotch.

Almond Flour: Almond flour will be used as a thickener for the filling.

Using a gluten-free pie crust mix will make your life easier. All you need to do is the following:

Allow the syrup to reach room temperature before adding the eggs and the vanilla extract. Then whisk until the syrup slightly thickens.

In a separate bowl, add the walnut, apples, cinnamon, and almond flour. Using a spoon, mix the ingredients until most of the apples are covered with flour.

Then, add the apples and walnut to the bottom of the pie. Then add the butterscotch filling and top the pie with some butterscotch chocolate chips. Bake the pie for 45-50 minutes or until the center of the pie is set.

Before slicing into the pie, allow it to cool down to room temperature. Then cut and enjoy! 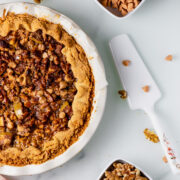