Sometimes I’m craving dessert for breakfast, and in those days, this gluten free cinnamon bread recipe comes in handy.

Xanthan Gum: Xanthan gum is needed to bind the ingredients together and provide the bread with structure.

Ground Clove: I find that the combination of cinnamon and clove work really well together. However, if you don’t like clove, you can omit it.

Water & Milk: Water and milk will be used to provide the bread with moisture. Milk also gives the bread flavor.

Instant Active Yeast: I love using instant active yeast as it is easy and saves time. It also does the job.

Unsalted-Butter: Since this recipe also calls for salt, we will be using unsalted butter at room temperature.

Egg: The eggs provide structure to the dough and make it easier to shape and handle.

Before making our cinnamon bread, we need to make sure that the yeast is active. To do this, add the milk and water in a microwave-safe bowl and heat it to 49-55°C (120-131°F). Then add the sugar and the instant active yeast and mix until combined. Cover the mixture, and let it sit for 10 minutes. The yeast should activate and form bubbles, as seen in the picture below. Now, we can safely start making our gluten-free cinnamon bread.

Then, in a separate bowl, add the butter, apple cider vinegar, egg, and yeast mixture. Afterward, mix the ingredients using a stand-alone mixer with the paddle attachment or a hand-held mixer at medium-high speed for 3-4 minutes. Then add the dry ingredients and mix at low speed or using your hand until the gluten-free cinnamon bread dough had formed.

Next, apply one tablespoon of butter to the dough and add the cinnamon-sugar filling.

Then, roll the dough into a log and transfer it to a greased loaf pan. Cover the dough with plastic wrap and a clean damp kitchen towel. Allow the dough to rise for 60-90 minutes or until it has doubled in size.

Bake the gluten-free cinnamon bread for 35-40 minutes, or until a thermometer inserted at the center of the loaf reads 85°C (185°F ). Allow the cinnamon bread to cool in the pan for 10 minutes before transferring to a cooling rack. 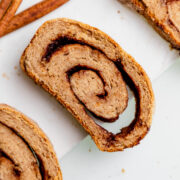