The History of Coffee Cake

When I was researching coffee cakes, it took me by surprise that coffee cakes do not actually contain coffee in the U.S. They are called coffee cakes because they are meant to be eaten while drinking coffee. So, I got curious and decided to do research on how coffee cakes came to be.

It is hard to trace where coffee cakes come from and how they originated to be. However, I found out that coffee cakes were introduced to the U.S through german immigrants. The cakes back then included yeast and dried fruit. In 1870, coffee cakes became popular in New York, New Jersey, and Delaware. At that stage, each bakery added its own twist and flavors. Now, most coffee cakes are flavored with fruits or cinnamon. Hence, the gluten-free cinnamon coffee cake I’m sharing with you today!

The Science Behind The Ingredients

Gluten-free Flours: If you are familiar with my recipes, then you know that white rice flour, tapioca flour, brown rice flour, and corn starch are stable in my pantry. These four gluten-free flours provide the best texture and flavor to a lot of baked goods, especially cakes. Therefore, to make this delicious gluten-free cinnamon coffee cake, you will need all four. The use of rice flour does not alter the taste of the cake and creates a soft cake. Meanwhile, tapioca flour provides structure to the cake and behaves similar to gluten. The corn starch works to balance the rice and tapioca flour. It prevents the cake from turning gummy and stretchy.

Texture: Cinnamon coffee cakes are supposed to be moist and dense. The use of milk and an extra egg yolk provides moisture to the gluten-free flour mix and helps achieve a soft and not dry cake. To create a dense cake, the mixing process requires minimum incorporation of air into the batter. Meanwhile, the streusel topping is crunchy and compliments the soft texture of the cake and the cinnamon filling.

The streusel topping is the easiest thing to do. However, before attempting to make it make sure that the butter is cold and is sliced into large cubes. This helps to achieve a crunchy streusel topping. To make the topping here is what you need to do:

The cake batter is very simple to make and can be done using a whisk, hand-held mixer, or a stand-alone mixer. I used a hand-held mixer for ease. Here is what you need to do:

The best part of this cake is putting it together!

Desserts that pair well with coffee!

Does cinnamon coffee cake have caffeine?

Cinnamon coffee cake contains no caffeine. It is called a coffee cake as it is traditionally served with coffee.

How do you store cinnamon coffee cake? 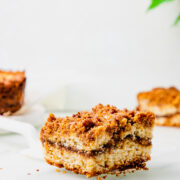