Kunafa (Knafeh, Kanafeh) is a sweet middle eastern dessert that consists of a crunchy top made of dough and a sweet filling.

There are various types of Kunafa, and the one I’m showing you today is inspired by the Palestinian Nabulsi kunafa, which originated from Nablus, a Palestinian city. Kunafa is an all-season dessert. In the middle east, the demand for Kunafa usually increases during Ramadan, Eid, and weddings season. Unfortunately, gluten-free kunafa is not as available. Therefore, why not make our own?

For the cheese filling, the following is needed:

If you are using Akkawi cheese, make sure to cut it into cubes and soak it in water for 24 hours to remove the salt.

The Kunafa syrup is what makes Kunafa sweet. The syrup is straightforward to make. It consists of one part water and two-part sugar, with a bit of lemon juice and rose water.

Add water, sugar, lemon juice, and rose water to a saucepan at medium-low heat for 6 minutes, stirring occasionally. The syrup is ready when all the sugar has dissolved. Then, cover the syrup and let it reach room temperature before using it.

Shredded phyllo dough is the crunchy part of Kunafa. This is the part that contains gluten in kunafa. Hence, to make gluten-free Kunafa, we have to come up with a gluten-free dough alternative. After five attempts at making gluten-free kunafa dough, I finally came up with a recipe I’m satisfied with. The ingredients you need to make the dough are the following:

Making the dough is simple. To start, combine all the ingredients in one bowl.

Using a hand-held blender or a stand-alone blender, blend all the ingredients together until no lumps remain. The consistency of the dough should be similar to pancake batter.

Transfer the dough to a bottle with a tiny hole. I usually use this mustard bottle. Does the job!

Heat a non-stick skillet at medium-low heat for 5 minutes. Then using the bottle, make a spiral with the batter.

After about 10 seconds, the batter will start to peel by itself. This means that the dough cooked. Using a spatula, collect the spiral and transfer it to a clean plate. Then remove the middle dot created at the center of the spiral and throw it away. We don’t need it.

Keep making spirals until you are out of dough. This is my final result.

The recipe I provided should make 400 grams of Kunafa dough. Enough for two 9” cake pans or 9 pieces of mini-kunafa made in a standard cupcake tin.

Mini-kunafa is more convenient for small families. However, the kunafa recipe card below will also contain a 9-inch cake pan option.

To start, shred the kunafa dough to 2.5 cm in length using a food processor or a knife.

Then add the sugar, butter, and ghee to it. Rub the shredded dough with your hand and make sure that all kunafa strings are well coated with butter and ghee.

Coat a cupcake tin with butter to prevent the kunafa from sticking to it when baked. Then, add a bit of kunafa pastry and shape it around the cupcake tin. Ensuring that all areas are covered and that the pastry is well pressed at the bottom and the corners.

Then fill the kunafa cup with cheese to the top and press it lightly to pack it.

This kunafa recipe should make about 9 pieces of mini-kunafa.

Bake, the Kunafa for 17-20 minutes or until the edges, are golden. Once baked, remove the kunafa from the oven and allow it to cool for five minutes before flipping the cupcake tin. Once, flipped add the kunafa syrup to the top of the kunafa and serve it warm. 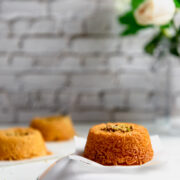