Chewy, thick, and soft gluten-free snickerdoodles covered in cinnamon sugar. These snickerdoodle cookies are easy to make and do not require shortening.

To make these chewy gluten-free snickerdoodles, you will need the following:

White rice, tapioca, and brown rice flour: Through trial and error, I found that the best combination of gluten-free flours for snickerdoodles is white rice, tapioca, and brown rice flour. I used corn starch instead of tapioca on my first attempt at these cookies, and it was a mess. The cookies were too crumbly. The use of tapioca provides structure and chewiness to the cookies making these gluten-free snickerdoodles perfect.

Xanthan gum: Since we are making our own flour mix, it only makes sense to add xanthan gum to help all the ingredients bind together.

Baking Soda: The baking soda will react with cream of tartar to create gas in the oven and help the cookies puff up.

Cinnamon: Ground cinnamon will be used. Make sure your cinnamon powder is labeled gluten-free, or just make it at home.

Unsalted Butter: The butter will provide the cookies with fat. I like to use unsalted butter to control the amount of salt I add to the recipe.

Cream Cheese: If you have tried my other cookie recipes, then you know I love to use cream cheese to make cookies. Cream cheese provides tanginess and chewiness to the cookies. It also offers gluten-free cookies with moisture.

Granulated White Sugar: You can use granulated white sugar or caster sugar. The sugar will be used to make the snickerdoodle dough and cinnamon sugar.

Eggs: I usually use one egg in my cookies; however, to provide these gluten-free snickerdoodles with structure, we will be using two eggs instead of one.

The beauty of snickerdoodles is that you can make them ahead of time and refrigerate the cookie dough. The cookie dough can be kept in the fridge for up to 24 hours. So if you have an event, you can prepare the dough the night or day before and bake some fresh gluten-free snickerdoodles on the day of the event.

Can you freeze snickerdoodle dough?

Why are my cookies spreading too much in the oven?

Baked gluten-free snickerdoodles can last in an air-tight container in the fridge for up to five days and for up to three days at room temperature of 20°C (68°C). 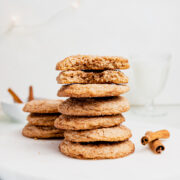