Cupcakes are similar to cakes. They can actually be considered small cakes. Their small size makes them convenient for events. The first mention of cupcakes was in 1796. Back then, they were baked in pottery cups. I guess that's where cake in a mug originated. Just like Vanilla cakes, vanilla cupcakes are a classic and have been around for a really long time.

The Basic Ingredients of a Gluten-Free Vanilla Cupcake

To make our vanilla cupcakes, we will first start by combining and whisking the dry ingredients such as flour, xanthan gum, baking soda, baking powder, and salt.

Then in the bowl of a stand-alone mixer with a paddle attachment or hand-held mixture, beat the butter and sugar until light and fluffy on medium-high speed. Then we will add the eggs one at a time, making sure each egg is well incorporated before adding the other. Afterward, add the vanilla and beat until combined.

Now, add half the dry ingredient mixture followed by the Milk and combine at low-medium speed. Then add the remaining dry ingredients and beat until combined making sure that you don't overmix the batter.

Align a cupcake pan with cupcake liners. Then fill each cupcake, making sure that the cupcakes are ⅔ full. Don't overfill the cupcakes, or your cupcakes will overflow in the oven. Finally, bake the gluten-free vanilla cupcakes for 13-15 minutes or until a toothpick inserted at the center of the cupcakes comes out clean.

This gluten-free vanilla cupcake tastes delicious without any frosting. However, to be fancy, we will make a Vanilla Swiss Meringue Buttercream. If you want to combine this cupcake with cream cheese frosting instead, check out our coconut cupcake recipe.

To make the Swiss Meringue Buttercream we will need the following:

Now, create a double boiler by adding a small amount of water to a saucepan and placing the heat-safe bowl on top. Make sure that the water does not touch the bottom of your heat-safe bowl. At low-medium heat, whisk the egg whites and sugar until the sugar dissolves. The sugar should dissolve when the mixture reaches 70℃.

Next, remove the mixture from heat and transfer it to your stand-alone mixture. Using a whisk attachment, whisk the egg whites and sugar at medium-high speed for about 15 minutes. Once 15 minutes pass, your egg whites should be foamy, fluffy, and have a strong peak, as seen in the picture below.

Now, we will reduce the speed of the mixture to low and add the butter one tablespoon at a time. Once you run out of butter, your Swiss meringue buttercream should have a stiff peak and a spreading consistency, as seen below.

Now you can flavor your Swiss Meringue Buttercream by adding vanilla or any flavor of your choice. You can also color it to create a beautiful frosting. 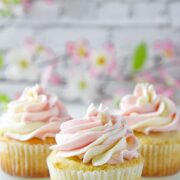